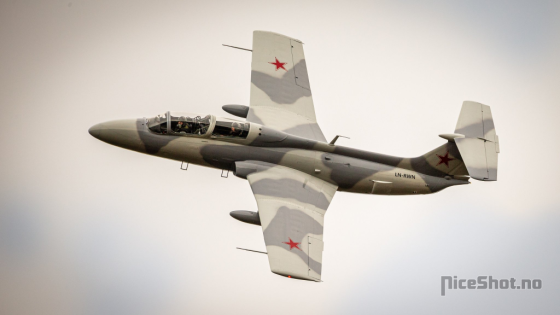 Utfyllende info på engelsk:
In the late 1950s, the Soviet Air Force was seeking a jet-powered replacement for its fleet of piston-engined trainers, and this requirement was soon broadened to finding a trainer aircraft that could be adopted in common by Eastern Bloc air forces.

Aero's response, the prototype XL-29 designed by Z. Rubli and K. Tom first flew on 5 April 1959, powered by a British Bristol Siddeley Viper engine. The second prototype was powered by the Czech-designed M701 engine, which was used in all subsequent aircraft.

The basic design concept was to produce a straight foward, easy-to-build and operate aircraft. Simplicity and ruggedness were stressed with manual flight controls, large flaps and the incorporation of perforated airbrakes on the fuselage sides providing stable and docile flight characteristics, leading to an enviable safety record for the type. The sturdy L-29 was able to operate from grass, sand or unprepared fields. Both student pilot and instructor had ejection seats, and were positioned in tandem, under separate canopies with a slightly raised instructor position.

In 1961, the L-29 was evaluated against the PZL TS-11 Iskra and Yakovlev Yak-30 and emerged the winner. Poland chose to pursue the development of the TS-11 Iskra anyway, but all other Warsaw Pact countries adopted the Delfin under the agreements of COMECON. Production began April 1963 and continued for 11 years, with 3,500 eventually built. A dedicated, single-seat, aerobatic version was developed as the L-29A Akrobat. A reconnaissance version with nose-mounted cameras was built as the L-29R.

The Delfin served in basic, intermediate and weapons training roles. For this latter mission, they were equipped with hardpoints to carry gunpods, bombs or rockets, and thus armed, Egyptian L-29s were sent into combat against Israeli tanks during the Yom Kippur War. The L-29 was supplanted in the inventory of many of its operators by the Aero L-39 Albatros. More than 2,000 L-29s were supplied to the Soviet Air Force, aacquiring the NATO reporting name "Maya."